For most of us, it’s hard to imagine a media-free day.

Understanding what’s happening in the world, maintaining our social media profiles, staying in touch with family, being entertained, making new friends, engaging with governments, and with our democracy, are all activities that usually require media participation.

To do these activities regularly and effectively, we need to have at least a moderate level of media literacy.

Media literacy is about more than having a set of technical skills and knowledge about media. It is also about the ability to critically engage with media: to discern fact from fiction, decide which digital technologies and platforms to use and which to avoid, and to critique the power and influence media and technology companies have.

We found most Australian adults have a low level of confidence in their media abilities including in areas such as checking if information online is true and checking if a website can be trusted.

This is a problem because people who are less adept at critically engaging with media are more vulnerable to influence from manipulative actors. Lower levels of media ability will result in fewer opportunities to participate in society socially and economically.

Overall, we found Australian adult media literacy is low. Most adults had either no or a low level of confidence in ten out of 12 media abilities we listed. 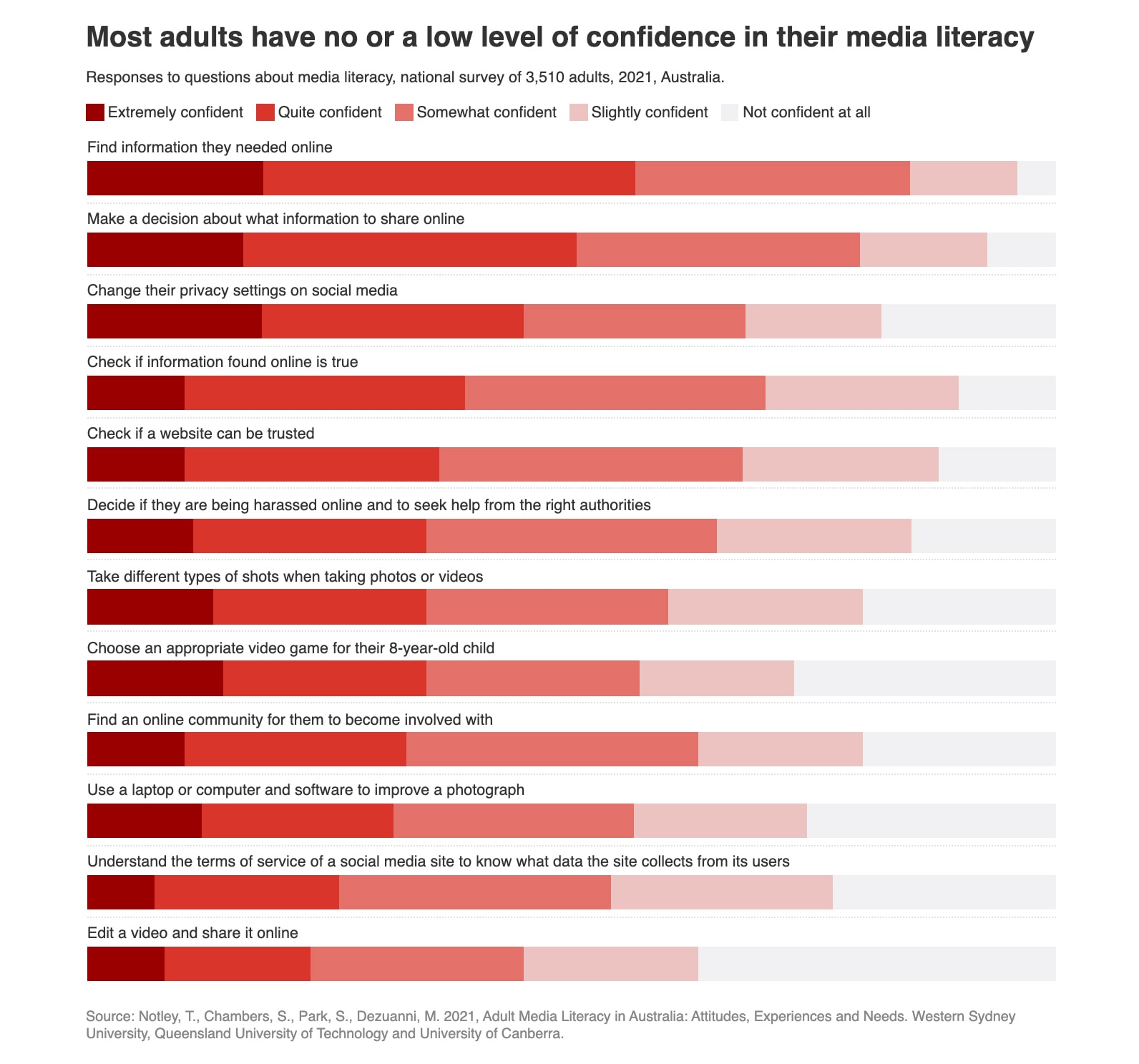 Our survey also showed many people lacked the ability to safely navigate online environments: less than half (45%) of Australian adults had a high level of confidence in their ability to change the privacy settings on social media. And only 39% said they were confident they knew how to identify misinformation.

We also found 30% of adults had received no help from any of the eight sources of support we listed which would help them analyse, use or create media. This included help from schools, friends, family and libraries.

Among those who have access to support, the most common source they turned to was online resources (45%) followed by friends (42%) and family (41%).

Those with a low level of education were the least likely to have had any support to help them with media participation.

This significant level of support indicates people believe formal education should play a more central role in the development of media literacy. 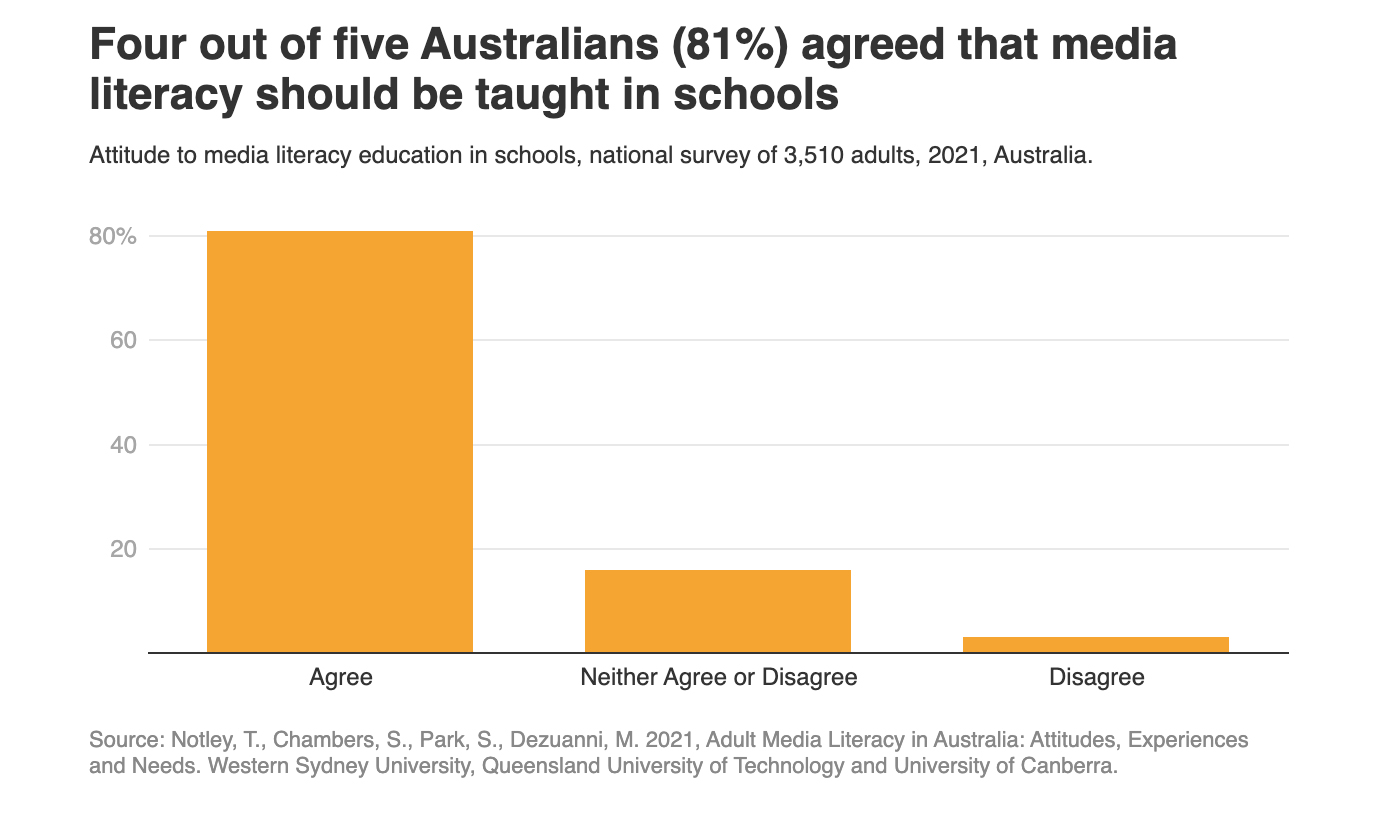 Thriving in a digital world

Misinformation has become one of the great challenges of our time. We have witnessed misinformation influence elections, threaten public health and safety and hamper democratic processes.

Most Australians (67%) said knowing how to recognise and prevent the flow of misinformation was extremely important or very important to them.

Yet our findings suggest some Australians are more likely to be vulnerable to the harms associated with misinformation.

While most Australians said it was important to think critically about the media they consumed, those with lower educational attainment and lower household income were less likely to believe this was important.

Those who have had access to more sources of media literacy support over their lifetime tended to place greater importance on critical thinking skills when using media (78% for those with two or more sources of support) compared with those who didn’t receive any support (55%). 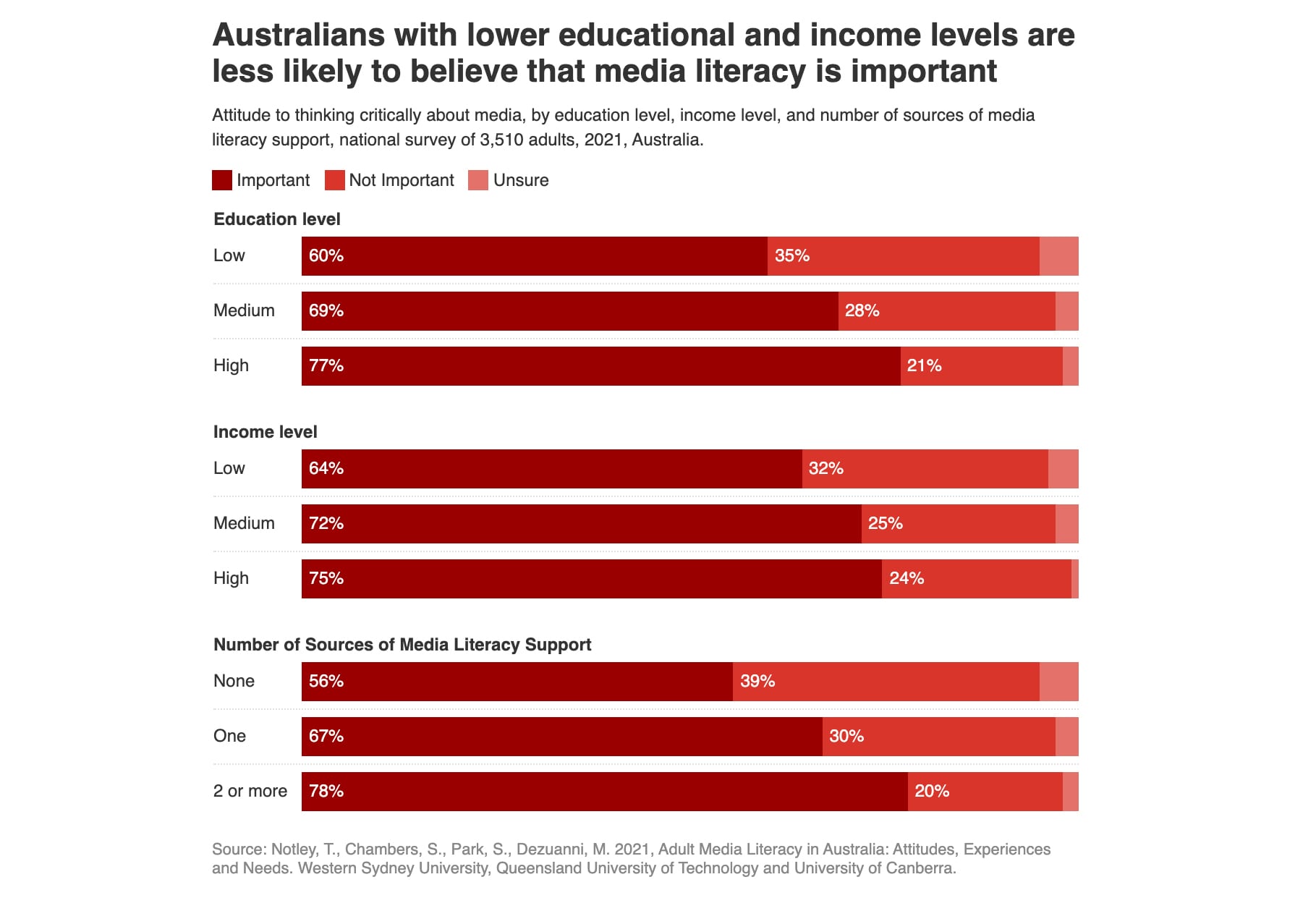 Despite this, there is no federal funding or a national policy to advance media literacy in Australia. Given what is at stake, the responsibility for being media literate should no longer be simply left for people to work out for themselves.