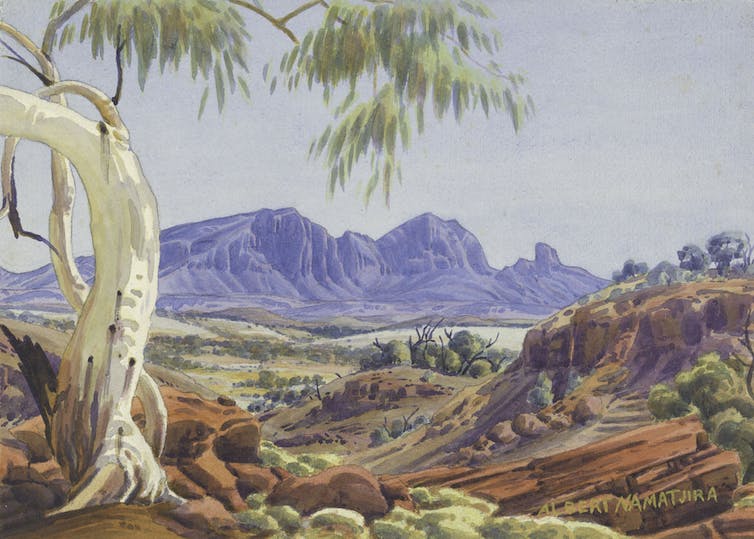 But Aboriginal art is more likely to bridge social divides and can dissolve personal prejudices between different kinds of art.

Many Australians are sharply divided as to whether they prefer more traditional genres like landscapes or more contemporary and abstract visual forms. And these divisions relate to differences in age, class and education. But Aboriginal art bucks this trend because it is seen as “telling a story”.

The research is discussed in a new book called Fields, Capitals, Habitus: Australian Culture, Social Divisions and Inequalities (opens in a new window).

Researchers subsequently partnered with the ABC (opens in a new window)to conduct online surveys on cultural tastes that were compared with research findings. 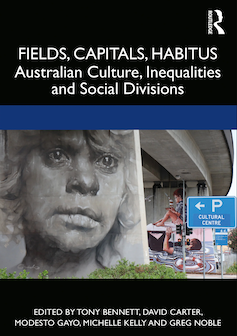 Routledge (opens in a new window)

Aboriginal art was the second most popular genre, liked by 26% of the main sample, behind landscapes (52%) but ahead of portraits (24%) and modern art (17%).

Impressionism and Renaissance art came in at around 15% each, while abstract art, colonial art, Pop art and still lifes ranged, in order, from 13% down to 7%.

Unsurprisingly, Aboriginal and Torres Strait Islanders were much more enthusiastic about Aboriginal art (67%) and Namatjira (liked by 70%) than the main sample, but not notably so for Moffatt. Indian and Lebanese Australians also showed a marked liking for Aboriginal art at 38% and 36% respectively.

Aboriginal art had a broader cross-class appeal than most genres. It did, however, appeal more strongly to those in intermediate (such self-employed and clerical workers) and professional and managerial occupational classes than to those in skilled or unskilled working-class occupations.

Namatjira was most popular with the older members of Australia’s intermediate classes. Moffatt, by contrast, appealed most to the younger, tertiary educated Australians in professional and managerial occupations.

There were clear correlations between these preferences for particular Indigenous artists and genre tastes. Those who liked Namatjira preferred traditional and largely figurative genres – landscapes, still lifes, and portraits. Those who liked Moffatt favoured genres tending towards abstraction or critical engagements with figurative conventions – modern art, Pop art and abstract art.

The great divide … and a bridge

Yet the category of Aboriginal art often crossed the boundaries between these two groups of genres.

This is not entirely surprising. Aboriginal art has expanded beyond its traditional forms to include acrylic dot art, contemporary urban Aboriginal art practices, rock art, or the kitsch forms of “Aboriginalia” like that collected by Tony Albert.

But what is surprising is how frequently, when discussing their art tastes in follow-up interviews, our survey respondents treated Aboriginal art as an exceptional art form.

While most viewed it as a form of abstraction, it was seen as a purposeful abstraction with a story to tell, crossing the boundaries between the abstract and the figurative.

Read more: Mavis Ngallametta review - a bittersweet collection of a songwoman's stories of home (opens in a new window)

It was on these grounds that Aboriginal art was let off the hook by those who usually disliked non-figurative art. This was pithily summarised by one respondent who, dismissing modern and abstract art as “equivalent to what my daughters would do in kindergarten”, praised the “uniqueness of Aboriginal art and the dots” because “there’s stories behind it – there is the story they are trying to tell”.

This was a recurring theme in appreciations of Namatjira. In a follow up interview, one survey respondent – a professional in a high-level executive role – liked Namatjira’s work for not being “too abstract” in its depiction of “the beauty of the bush and the country”.

For another, a part-time accountant and labourer, Namatjira served as a counter to his dislike of modern and abstract art because his paintings are “real … they just feel like he’s telling a story in his pictures and they’re real”.

And a third, a woman in her 30s from a Sri Lankan background, expressed her appreciation of Namatjira and Moffatt in similar terms. She loved “Tracey’s storytelling” with its “strong style and voice”, emphasising its appeal to both Indigenous and non-Indigenous women, while singling out the “cultural connections” that Namatjira’s work makes.

While, then, different kinds of Aboriginal art appeal to different publics, the category of Aboriginal art is one that recruits a broader interest. We got a strong sense that it is something that non-Indigenous Australians felt they ought to like and know more about because of what it has to say about Indigenous culture, its relations to Country, and its significance for Australian culture and identity.

This registers a significant shift from the terms in which Namatjira was initially appreciated, in the 1950s, as an imitative adaptation (opens in a new window)of pastoral modernism.

It is a shift that registers the work of Indigenous artists, curators and critics in stressing the role that Aboriginal art can play in transforming the relations between Indigenous and non-Indigenous Australians.

This article is republished from The Conversation under a Creative Commons license. Read the original article (opens in a new window).