The Institute for Australian and Chinese Arts and Culture proudly presents this visually stunning and thought-provoking solo exhibition by Dapeng Liu. Dapeng Liu was born in Beijing in 1982. He received his BA (Honours) in Visual Communication from Northumbria University and MA in Art History from the University of Sydney. In 2014, he decided to suspend his PhD studies and became a full-time artist after he was shortlisted as one of the top six finalists for the Archibald Prize. He went on to become a finalist for the Sulman Prize in 2015, a finalist for the Mosman Art Prize in 2017 and a finalist for the Archibald Prize again in 2021. Dapeng’s artistic style is very unique and distinctive. His colours, compositions, shapes and forms, and his imagination and perception are both striking and nuanced. While his artworks are often surprising, they also speak to, and readily resonate with many viewers. His artistic probe into reinventing traditional Chinese landscape painting, infused with his own storytelling, is marked by his deep thinking, precision and his subtle sense of humour. This solo exhibition showcases Dapeng’s latest works in which perspective, composition and colour arrangements lie central and they create a metaphorical realm of natural and man-made worlds. As Dapeng says, “Without void in painting, form, shape and line cannot be sensed. Without void in mind, thoughts and ideas cannot grow.”

How to Get Here:

By train: to get off at Parramatta Station, then take the University shuttle bus to Parramatta South Campus
By car: guest free parking in Park 1 (only), the first carpark on the right hand side after entering the gate Dapeng works primarily with oil and water based medium. His quest to strike a balance between the depth of human thought and the quality of artistic technique and style is the hallmark of his artistic endeavours. This is well reflected in his major landscape series. These paintings, often enriched with emotion and story-telling, create an impression of a fusion of the East and the West as well as the old and the new. Nevertheless, the intrinsic consciousness reflected in his works is to blur the boundaries between different time, space and dimension, and delve into the intangible realms.

His solo and group exhibitions include:

The works curated for this exhibition aim to illuminate my artistic exploration over the past eight years.

Recently, many people have commented that my new paintings look so different to before and asked what factors precipitated these changes. This exhibition hopes to answer the question. Concomitantly, it is more pertinent to explore the framing ideas that have threaded the different periods of my art. The changes of styles over the years may seem abrupt. However, a common theme underlies the evolution of my work.

From 2014 when I became a full-time artist, the initial years directly manifested my passion for Song (960-1279) and Yuan (1271-1368) landscapes. I created my versions of blue-and-green shanshui 山水- mountain and water landscapes, by incorporating Chinese mountains and Australian coastlines and seascapes, while adding small elements such as furniture and figures. I facilitated a dialogue between old and new, east and west amidst a shanshui setting.

I started minimalising in late 2017, but without a clear direction. After much experimentation, unsatisfied, I realised that my passion for shanshui lied in its composition and perspective—a scattered focus points system or sandian 散点, which creates atmospheric illusion of depth, time and light. The result was my 2019 Uninhabited Space series. I blurred all edges, used glazing, and minimally focused only on composition and depth of the landscape. I also removed all small elements and figurative depiction.

In my 2020 iteration, I challenged myself by adopting more colours, partially inspired by my reading on colour theory and the history of oil paints, and also by drawing from colour field and hard-edge geometrical paintings. Still retaining forms of mountain and water landscapes, I refrained from non-representational abstraction. Perspective, composition and colour arrangements lie central in my work. Juxtaposed forms of landscape and geometrical shapes create a metaphorical realm of natural and man-made worlds. The distance between these two worlds is usually uncertain, perhaps due to the translucent effect, or depending on how the viewer understands the relationship between man and nature.

The lessons I learnt from shanshui, its ability in worldmaking through the awareness of heaven-and-man oneness, are crucial to my artistic practice. ‘Void’, as used for the title of this exhibition, is not complete nothingness, but rather a part of the oneness. Without void in painting, form, shape and line cannot be sensed. Without void in mind, thoughts and ideas cannot grow.

The inspiration for Dapeng Liu’s paintings comes from many of the sources which interest him, including the rich heritage of classical Chinese paintings and his new homeland, Australia. Born and raised in China, where his father taught him to sketch and paint, Dapeng Liu moved to Australia in 2007. Here his research into the history of classical and modern art in China at the University of Sydney helped to inspire his work. During that time, he continued to paint and in 2014 chose to make it a full-time commitment.

In his paintings, Liu likes to continually explore and develop themes which interest and challenge him. A recognisable feature of his work is the classical Chinese shanshui (‘mountain-water’) brush and ink style depicting natural landscapes of mountains and rivers. His work also includes his observation of seascapes, coastlines, architectural structures, the observation of space, and portraiture. He presents them using his own language of artistic expression, which comes from a stream of consciousness, while taking a form of their own. They are part of his cerebral exploration which is often drawn out by listening to music that revives and relaxes him and recalls memories which he turns into paintings.

He is deeply interested in the works of many writers including the philosophical writings of René Descartes and his interest in substance dualism; Josef Albers’ investigation on the interaction of colours; and Victoria Findlay’s exploration of the history of colour also inspires him.

Liu’s paintings reflect his fascination with the differences and similarities between the East and the West, the new and the old and his profound interest in internal and external space. He enjoys exploring and comparing geometric spaces created by nature and those which are manmade. He continuously challenges himself when he paints, searching for new ways to present the themes that interest him, particularly his passion for landscape. Contrary to the traditional ink and brush on paper or silk of Chinese shanshui, he paints in oil on canvas. While some of his works are representative of traditional works, in others, he uses geometrical figures to create the landscape. These works are not the hard-edged abstracts of the late 1950s and 60s but his own abbreviation of form and space.

In Mountain Pavilion 2016, Liu uses the essence of the traditional classical Chinese landscape to create a space which is both internal and external. The colour of the chair is subtly reflected in the wisps of yellow that wind through the room and the landscape, encouraging the viewer’s eye to travel through the interior architectural space and exterior spaces of nature presenting playful queries and enigmas. The addition of a eucalyptus tree is a homage to Australia so that the whole painting is a blend of East and West, China and Australia.

Mountain Pavilion continues a theme of his earlier works, Mountain Listener 2015 and The Big Room 2016. The latter is a more enigmatic painting, demanding the viewer discern the space they are looking at. Are we looking at an internal or external space? Or is it two external spaces? Is the small, internally-lit house sitting on the rocks inside or outside?

In Light of the Mountain-Green 2020 and Light of the Mountain-Orange 2020, he presents the mountains in geometric shapes, minimalising them to geometrical figures whilst focusing on the composition and perspective. The paintings are identical - only the colours used in them differ. This produces a completely different impact on the eye. Liu enjoys observing how the use of different colours changes the viewer’s impression of the painting in front of them.

Liu is interested in how shapes transform as the light changes through the day. How a sudden sunbeam coming through a window can alter the emphasis on the objects it alights on. How the use of different colours on an identical geometrical shape changes the feeling and the impact of a composition. In Seascape and Sun 2020 and Seascape and Sunglasses 2020, the geometric shapes are similar, but by the use of different colours, we observe two different images.

The use of colour is very important to Liu. He likes discovering how different colours can be achieved by mixing pigments, preferring oil over acrylic paint, delighting in the way it feels as it is applied to different surfaces, canvas, Belgium linen and even paper. He enjoys making his colours translucent and chooses one that relates to the traditional paintings.

Liu’s portraits also combine Eastern and Western elements, the modern with the ancient. In the portraits of Marie Bashir, and Yin Cao, the sitters occupy the foreground but are united to the classical landscapes behind them by the subtle use of colours.

Liu feels that nothing that has been created is irrelevant. In the four Reclaimed 2022 images, he used works that he has discarded and cut up to create completely new abstract images. By juxtaposing discarded lines and colours, he produces new ones.

Liu’s paintings are a reflection of his dualism, melding the classical Chinese painting with its ancient history and modern life in Australia. As the poet, T.S. Eliot said of his works, ‘it would not have been what it is if I had been born in England and would not be what it is if I had stayed in America. It is a combination of things’. So too are Liu’s paintings, accessing the East and West, the ancient and the modern, and making it uniquely his own. Guide to the Museums of China, Orientations, 2002

Q & A WITH  ARTIST DAPENG LIU

Transcript of  Q & A (opens in a new window) 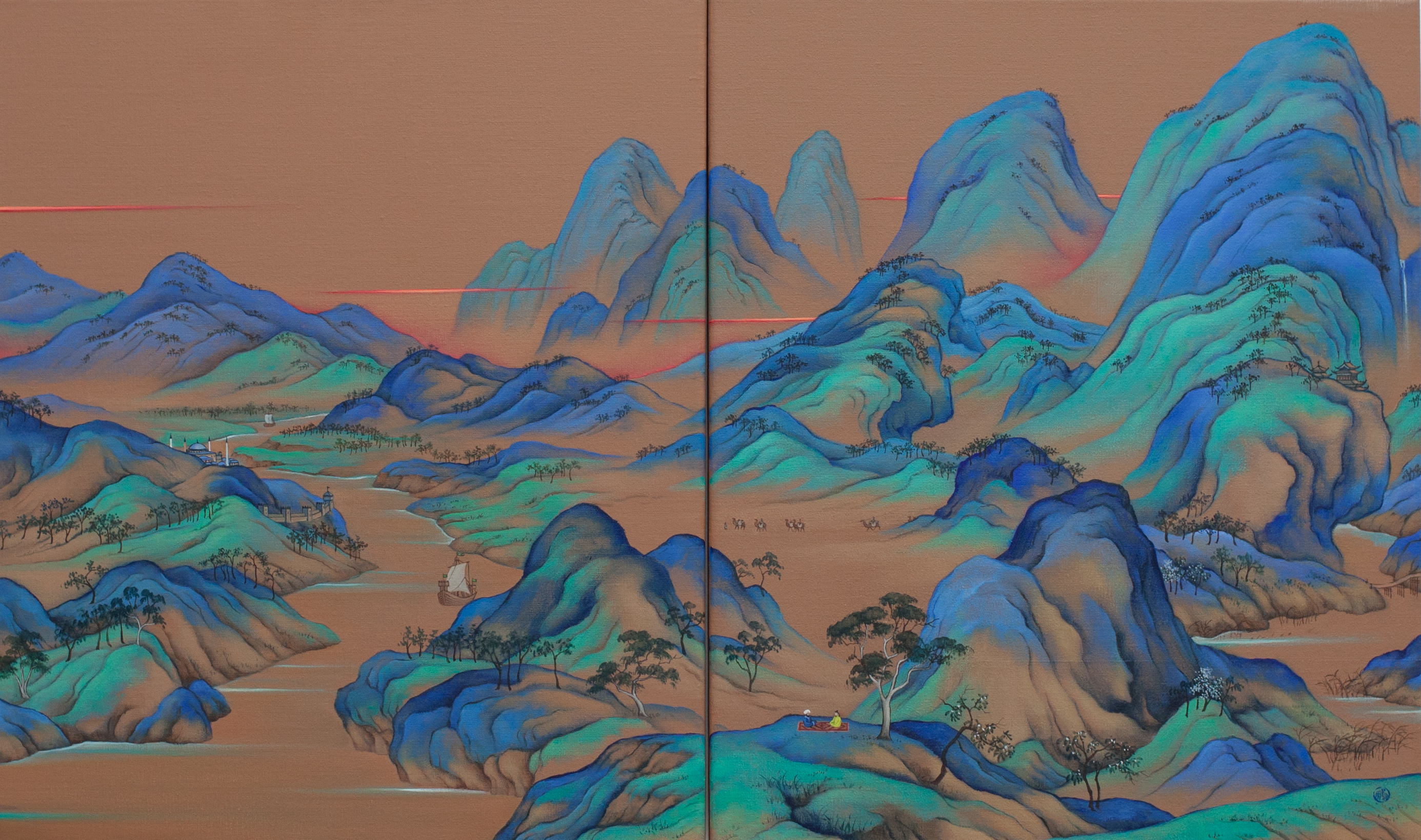 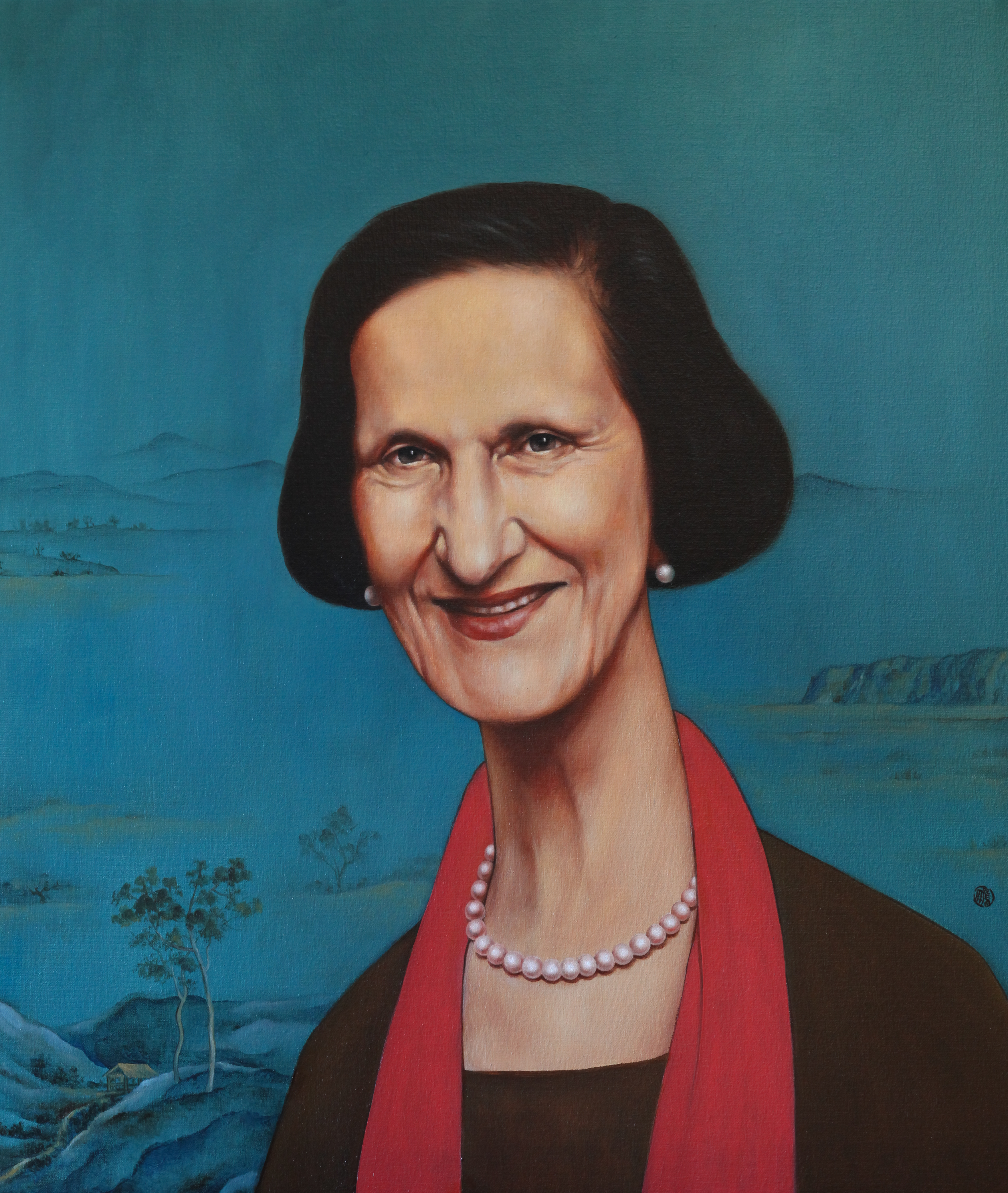