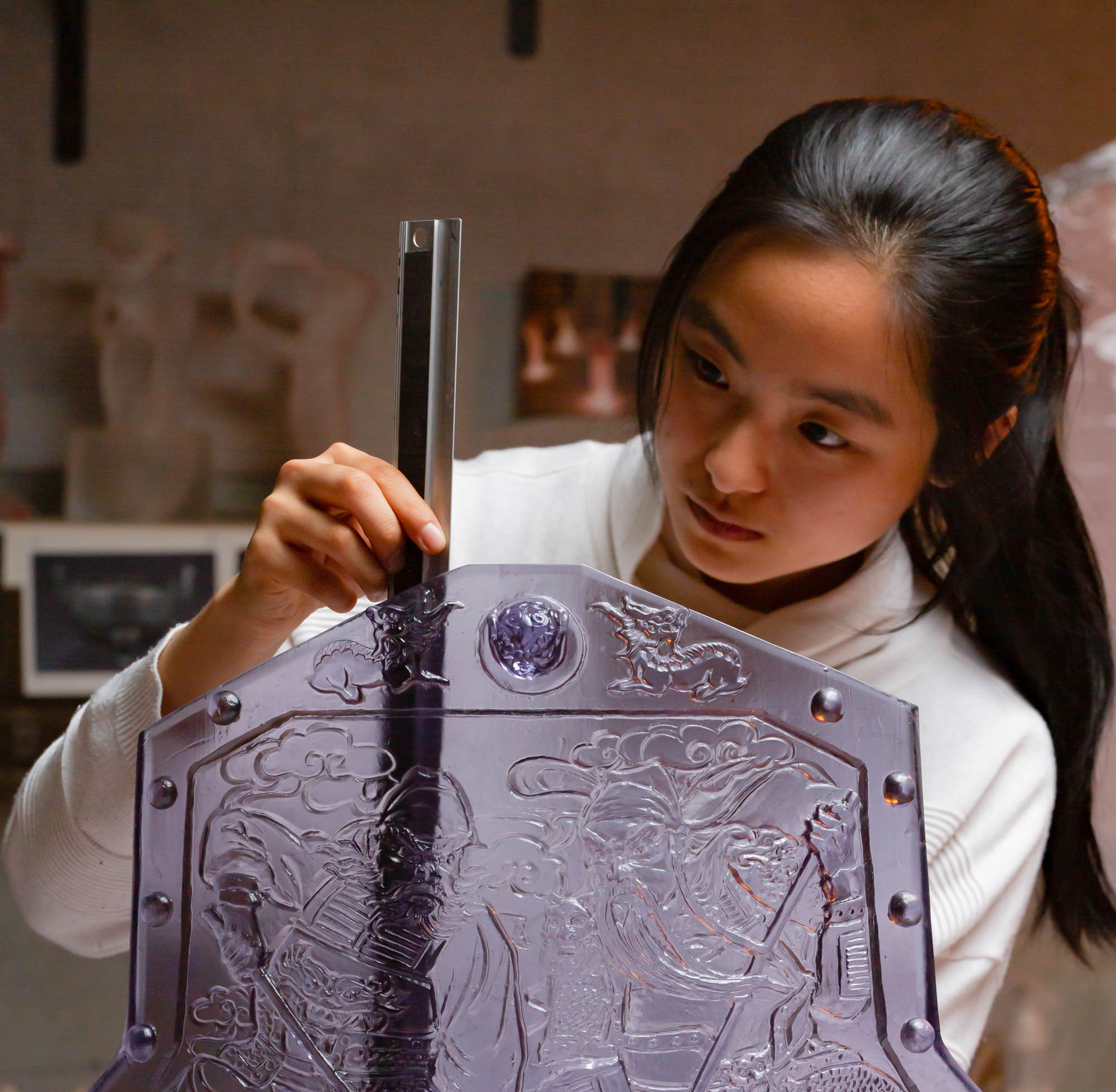 Sydney-based artist NC Qin explores the histories of ancient battle artefacts with her primary medium of glass to prompt conversations on heritage, values and ideals. Her process is incredibly labour intensive, involving various stages of production with technologies such as kilns. She employs glass with its symbolic association with fragility as a lens into personal and cultural histories as well as psychological spaces. Her work alludes to global epics and philosophies that reflect her interests as a Chinese-Australian woman as she explores how myths change the value systems of today.

Her series Phantom of Ego is named after a Nietzschean concept exploring constructed social identities that are moulded together through a mix of cultural influence and environmental upbringing. The glass armour and battle artefacts within the series are charged with references to Chinese legendary and heroic history deferring to the weight and pride placed on these objects. However, stripped of their function through their forming with glass, these objects are unable to fulfill what they were intended for: protection and battle. Our understanding of these chosen objects is subverted with this neutered form revealing vulnerability in places where imperviousness should stand. This, in turn, reflects the complex relationships with the qualities that we value, qualities that may no longer be applicable in a changed world but still function in the shadows of its heritage.

Nancy has exhibited in spaces including Griffith Regional Gallery, First Draft Gallery, 107 Projects, Sydney Contemporary Art Fair and installed works in sculpture walks such as HIDDEN in Rookwood Cemetery and Fisher Library, University of Sydney. Her series ‘Head Case’ exhibited at the National Museum of Glass (Wagga Wagga, NSW) as the winner of the National Emerging Art Glass Prize (2020) and at the Ashmolean Museum of Art and Architecture (Oxford, UK) as a finalist of IDENTITY: an art and design prize (2019). In 2021, Gallery Lane Cove commissioned her solo exhibition for Lunar North Confluence, a program that connected Art Space on the Concourse, Incinerator Art Space and Macquarie University Gallery. Compass Broken (2021) is an exploration of identity and displacement. Based off the ancient Chinese Daoist compass: the luo pan, it shows the symbols of each of the mythical guardian beasts that rule over a direction. The Tortoise of the North, The Tiger of the East, The Phoenix of the South and The Dragon of the West. The reason the compass is considered broken is because it has lost its original context. The Phoenix represents the south because in China the Equator, which represents fire is towards the south of China. However, in its current context (Australia) in the southern hemisphere it no longer works. It's a physical representation of third culture kids (those who are born in Australia from immigrant parents of different cultures) who try to reach out to the culture of their ancestors yet finding themselves gaining only superficial understanding connection as they're removed from the original context. It draws parallels to objects in the British Museum, which have similarly been removed from their original context losing their original significance. 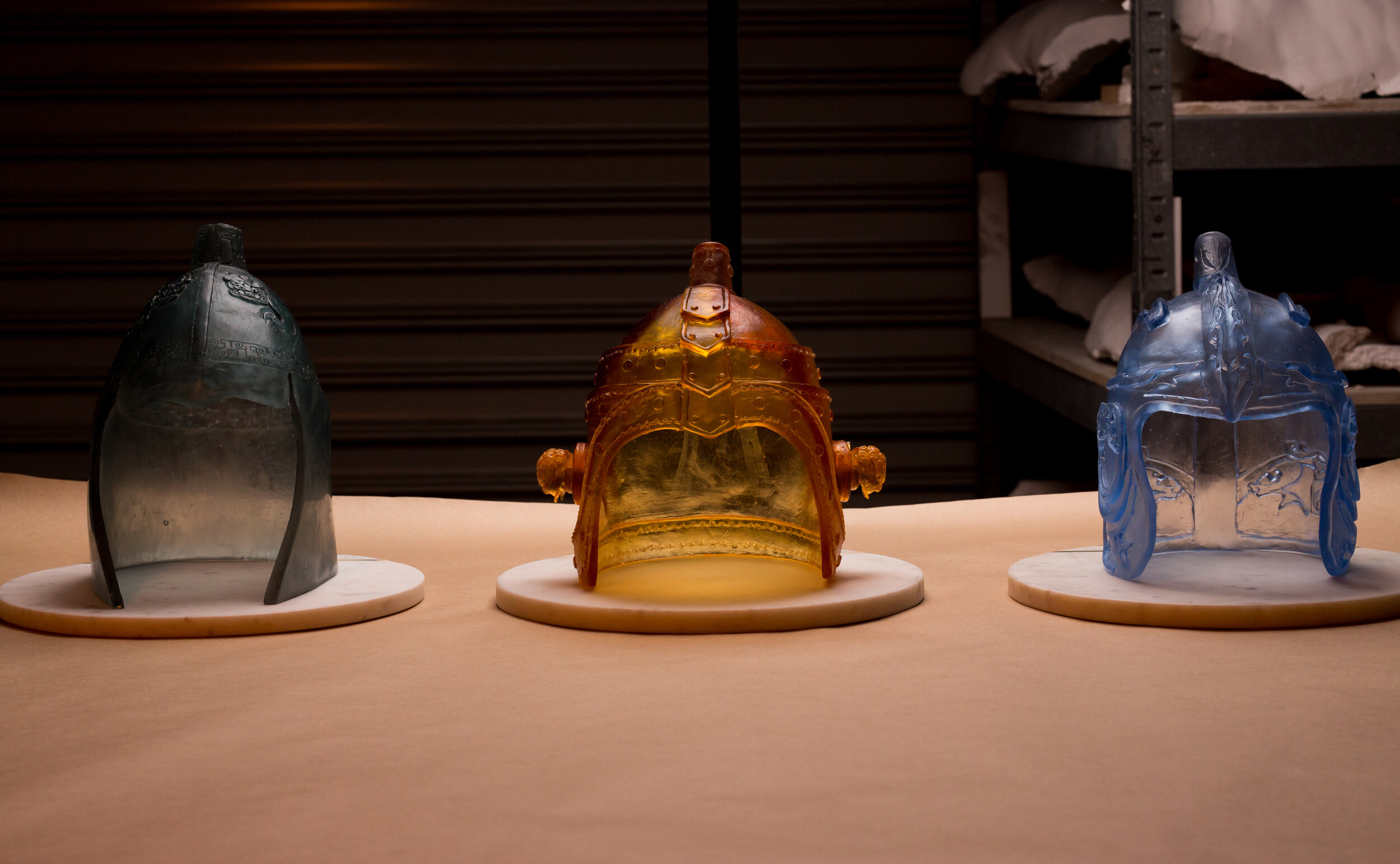 Intent, Phantom of Ego/Armour Series (2020) explores the glorification of violence in the pursuit of power. The idea of having the bigger gun (or blade in this case) leads to the bigger say. Modelled after the legendary weapon of a revered Chinese warrior Guan Yu, who has since been deified into a god and symbol of loyalty, righteousness, and bravery, I wanted to examine the acts that lead to this image of power. By creating an object of beauty out of a symbol of death and violence, I want to question the nature of conflict and its true ability to serve the ideal it fights for - the handle, a wash of blood red (represents the intent and spirit of the wielder), transforms into the fuming, polluted, swirling chaos in the blade. Violence even done under good intentions transforms irreversibly into something else. Questioning if violence is ever noble. 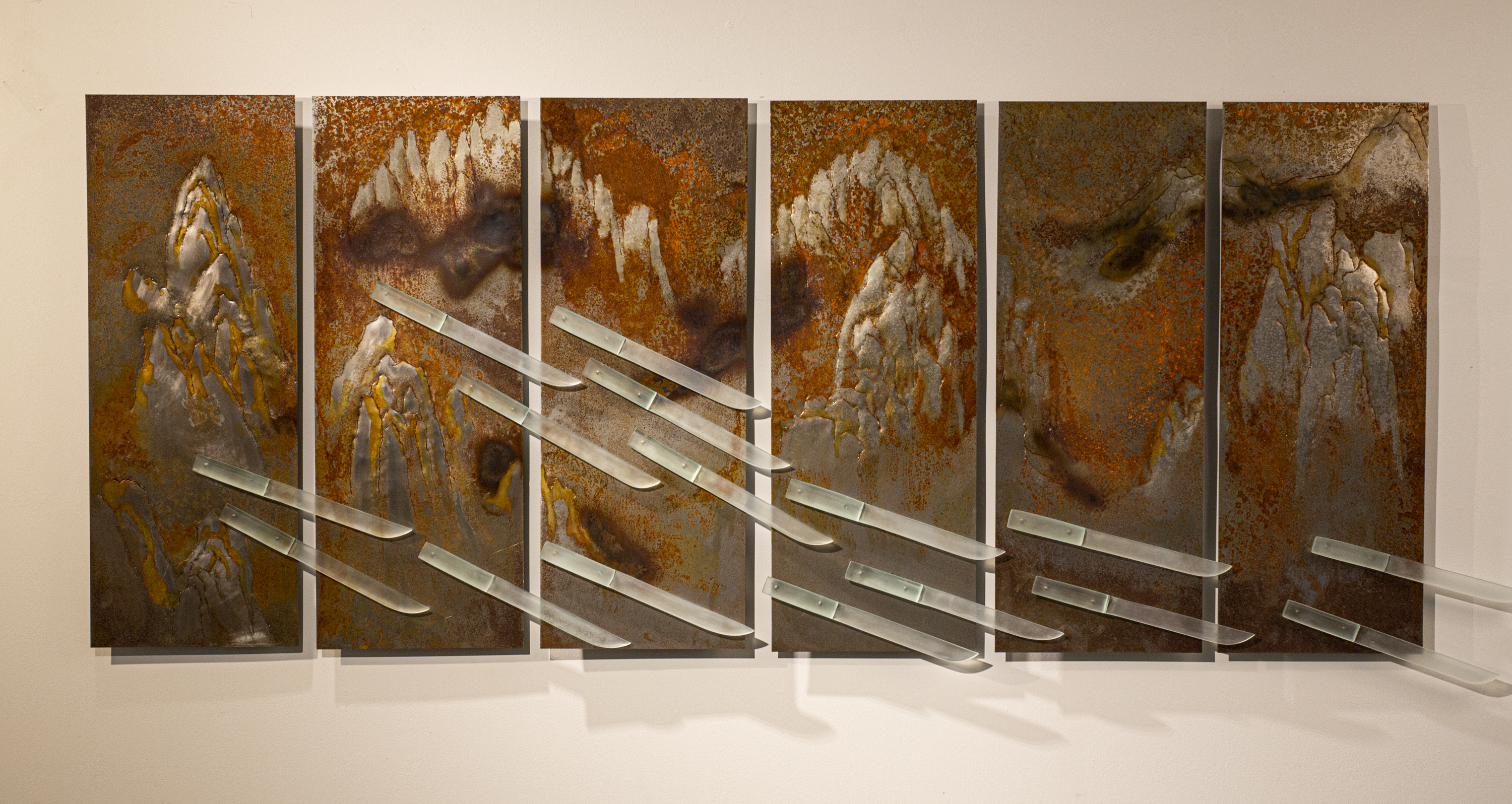 Winner of the Vicki Torr Prize 2021

Portal: The Closed Door (2021). Modelled after the tower shield (Shuang Hu Dun) in Qin Shi Huang Di’s tomb used during the Warring States, this piece represents the door to the psyche, the facade we all put up that hides our rich inner world. Foreboding but enchanting, it shuts us out yet pulls us in - a heavy portal to another world that others can only glimpse through the cracks that form under pressure. 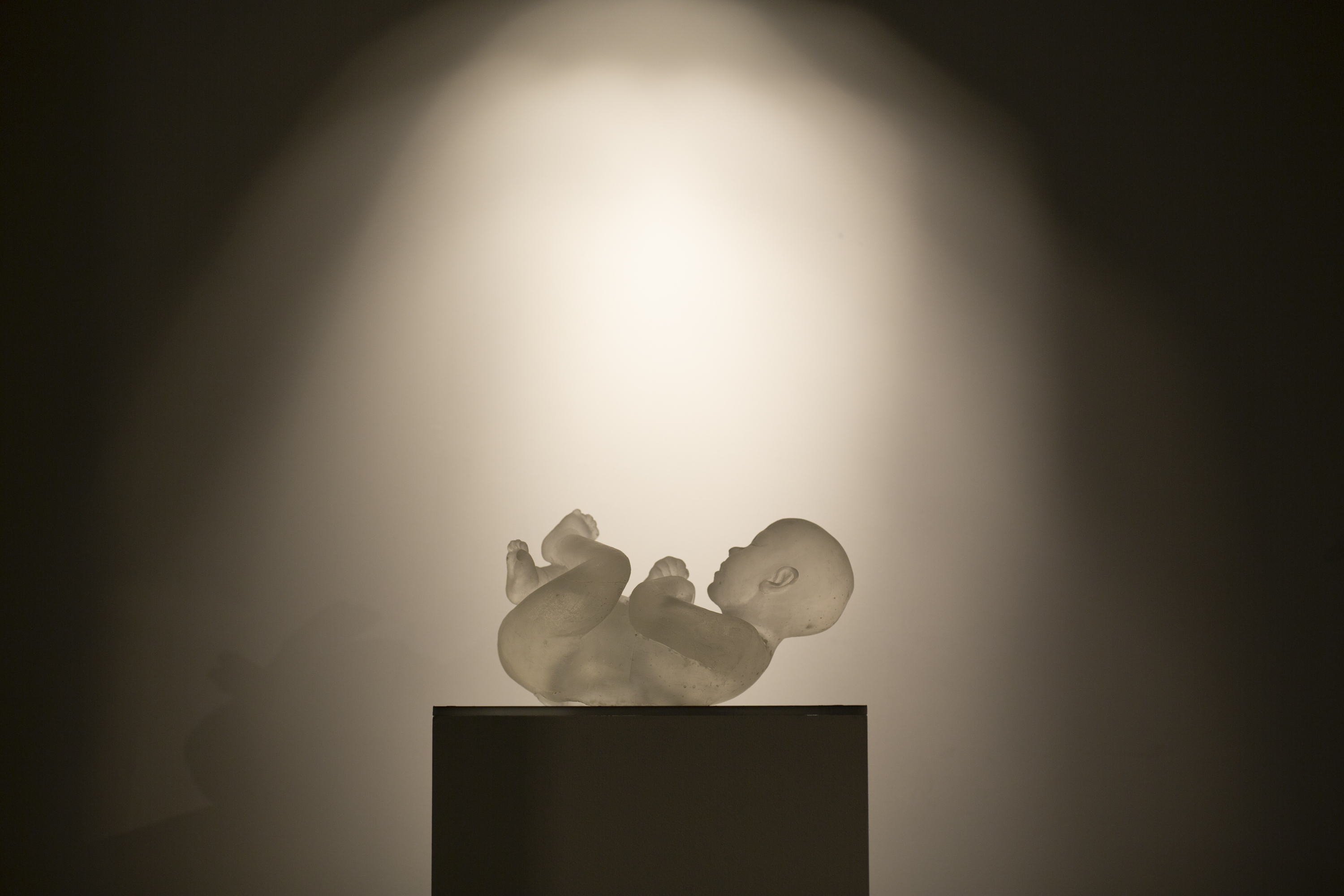 A glass armory of ancient battle artefacts emerge in this collection of works exploring themes of vulnerability, appearance and heritage. Most of them allude to real heroes and famous weaponry that have appeared in various times of Chinese history, but each has been given a new life and meaning in this series.

‘Portal’, a jade gate, modeled after the tower shield (Shuang Hu Dun) found in Emperor Qin’s terracotta warriors tomb, stands forebodingly with its cracks and ethereality. It is a door to an inner or buried world within the psychology of the artist. The works that it guards behind it are glimpses into lived and diasporic anecdotes told in symbolism.

The artist reinterprets well known Chinese myths such as the epic “Romance of the Three Kingdoms” (which depicts the rise and fall of heroes during the Three Kingdom period 169-280AD) through a cultural perspective that has been shaped by both Eastern and Western influences. There is an acknowledgement of the cultural heritage that is a source of pride and meaning to many Chinese people and their descendents, but also a realization of this heritage being a possible burden to members of this contemporary, changed world. The works explore how the ideology exemplified in these myths still influence the values in Chinese Australian culture today and the possible ramifications. One of the values that remains central to this body or work is pride and the pursuit of living up to an ideal. Through investigations grounded in the European analytic tradition (Freudian and Nietzchean), the glass armour asks are these ideals a source of protection to uplift the individual or burdens that may eventually injure and crush the bearer?