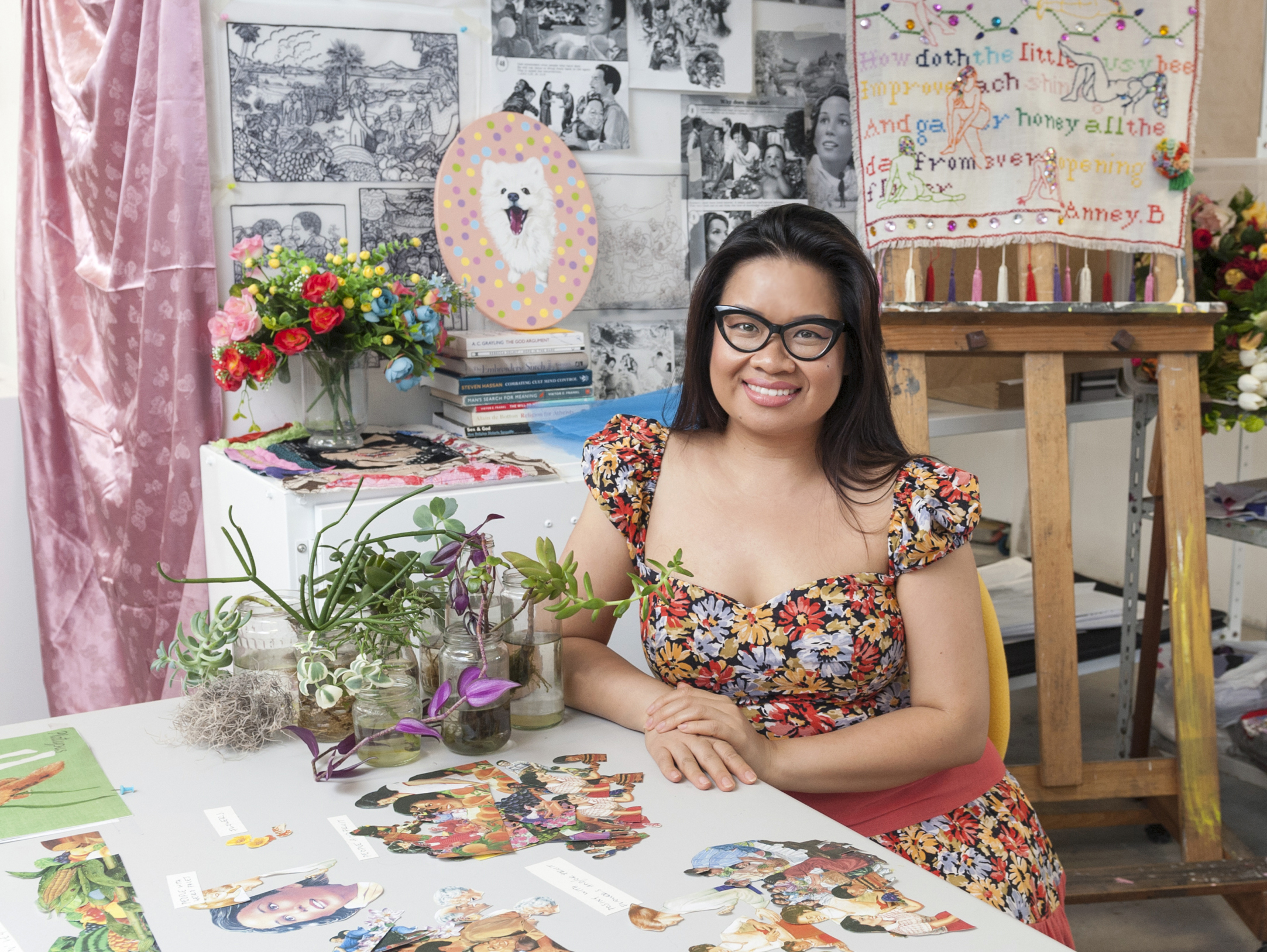 Anney Bounpraseuth is an Australian-born artist of Laotian heritage. She describes herself as a ‘third culture kid’, who grew up somewhat removed from her Australian and Laotian identities as a Jehovah’s Witness until her departure from the faith at the age of 30.

Bounpraseuth describes her kitsch, vivid and intensely patterned aesthetic as Cabracadabra or ‘South East Asian mum-style’ in honour of her mother Chockeo who came from Laos to Australia as a refugee migrant, raising her family in Cabramatta of South West Sydney. Bounpraseuth cites her mother's clashing wardrobe and interior decorating style with fake flowers, imitation antiques and mismatched textiles as her main artistic influence. Like many migrant women in the Laotian community in the 1980s, Bounpraseuth’s mother was a machinist outworker - sewing garments from home for well-known fashion labels for as little as five cents per garment. As a child, Bounpraseuth would select floral and lace fabrics from claustrophobic Asian fabric stores that her mother would sew into puffed sleeved flower girl dresses to wear to the local Kingdom Hall. An underlying thread in Bounpraseuth's work is the tension between motherly love and a daughter's desire for approval and autonomy.

Bounpraseuth has been featured on ABC TV and iView, ABC Radio National, FBI Radio’s Canvas program and Frankie Magazine. In 2019, she was a finalist for the Hidden Rookwood Sculpture Exhibition and Prize. She has presented in various galleries across NSW with solo exhibitions at Fairfield City Museum and Art Gallery and Bankstown Arts Centre. In 2018, she curated the February ARTBAR at the Museum of Contemporary Art.

In addition to being an artist, Bounpraseuth has also been a recreational art educator since 2004 with experience in public and education programming.

Bounpraseuth reinterprets matriarchal traditions through painting, textiles, and sculpture to assert self-determined identity. In creating her textiles influenced work, Bounpraseuth cuts up painful histories and complex relationships, salvaging remnants of the past to create new narratives as a form of repair or personal healing.

Bounpraseuth’s current practice is concerned with how the concept of a present paradise in contemporary textile art can generate healing after the traumatic loss of an eschatological faith. More broadly, Bounpraseuth aims to counteract the baneful and hypersexual misrepresentation of apostates in art history, the world they inhabit, and the fulfilling lives they can lead. Drawing from personal spiritual narratives, Bounpraseuth creates iconography that shifts utopic representations of earthly paradise from the past and future into the “perfectly imperfect” present reality through the medium of salvaged, upcycled textiles.

Expanding on femmage of the 1970s, Bounpraseuth calls her process and textile works “cr-applique” along with her own parameters:

"A cr-applique is a self-coined neologism for a narrative applique that utilises painting and textile waste or ‘crap’, be it personal crap and/or other people’s crap, in the conversion of negative subject matter, also known as ‘life’s crap’, into something tangible or visible, purposeful, positive, beautiful, and true to life’s realities but tempered with a sense of humour. The aim is to create a work that is not crap in the eyes of its maker, irrespective of subjective criticism regarding its crappiness."

For Bounpraseuth, the garden is a metaphoric place of freedom, healing, growth, and creating and exploring a new life of one’s own. As a recovering apostate, Bounpraseuth’s work posits the notion that a purposeful life without god and religion is imaginable in both material and immaterial forms. 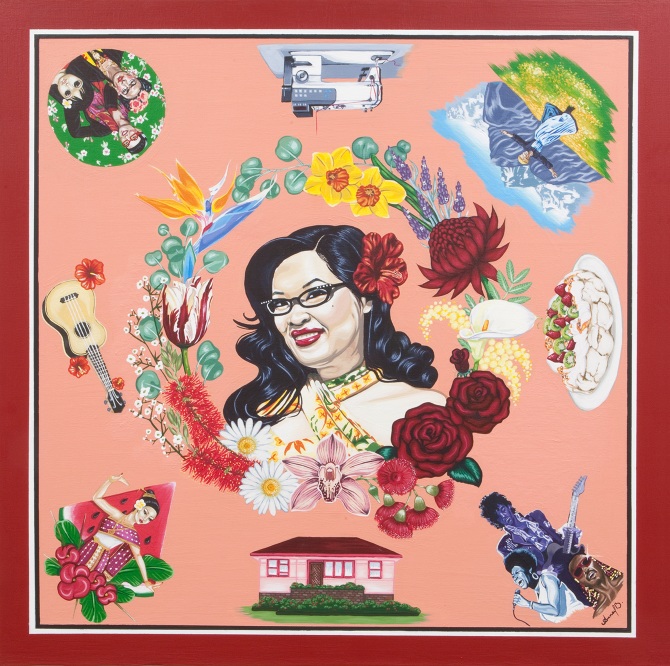 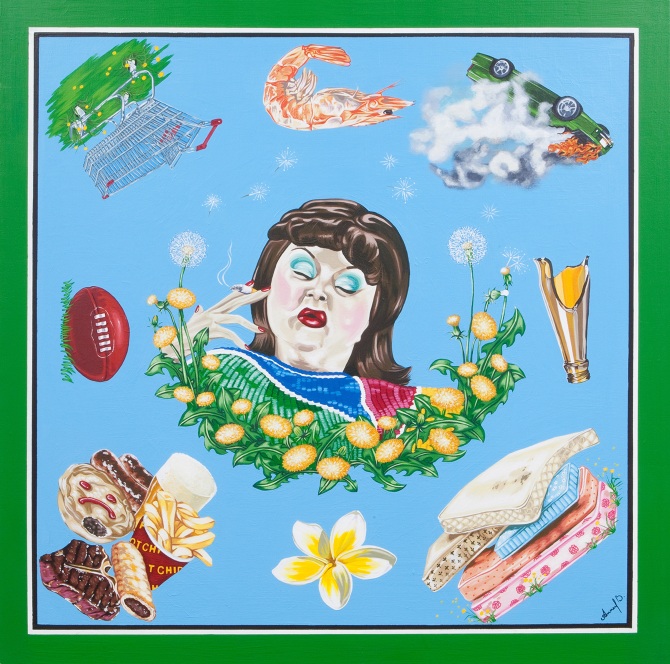 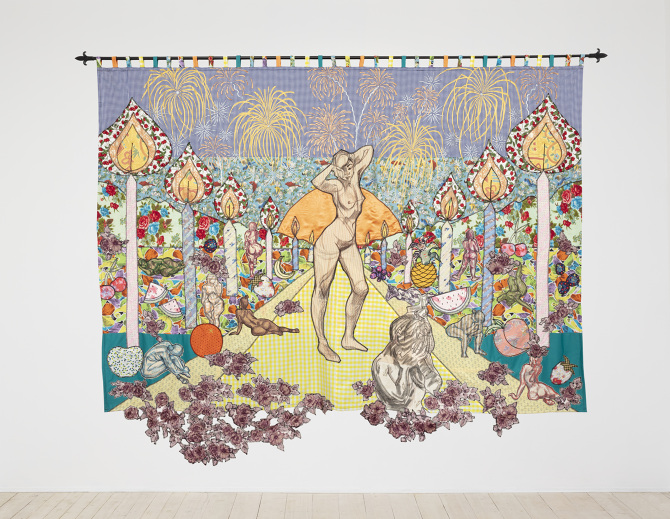