Large rainout shelters enable us to exclude natural rainfall on tree stocks up to ten metres in height, to impose drought or altered rainfall conditions in either pot-grown or in-field plantings 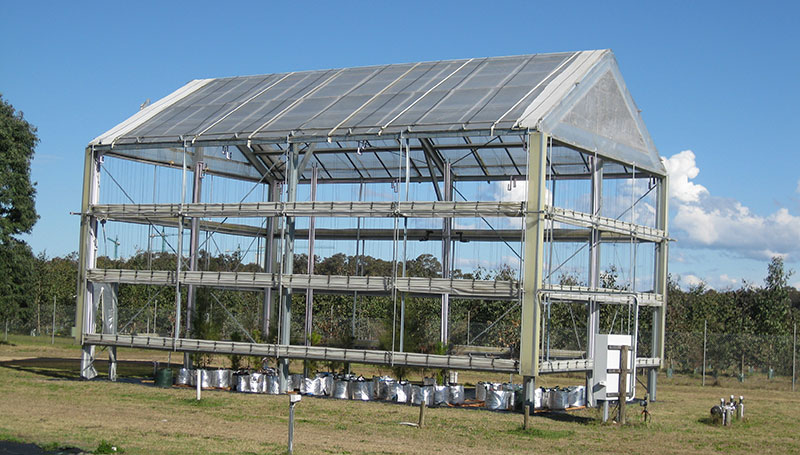 The shelters are rain-sensing with automatically retractable roofs and curtains that close within thirty seconds of rain detection. Each shelter is 12m long, 8m wide and 7m tall, providing a large area for potted and field-grown plants.

The shelters are equipped with environmental sensors linked to data loggers to measure wind speed, relative humidity, air temperature, light, soil temperature, soil moisture and soil water potential at different depths and locations. Rainwater is captured from each shelter and stored in a 220,000litre tank, and can be reapplied to the field sites as needed.

Collected rainfall can be reapplied under a variety of scenarios – from light mists to heavy deluges or at varying frequencies.

These Rainout Shelters enable researchers to precisely control rainfall to simulate drought conditions, so they can assess the causes of tree mortality from hydraulic failure or carbon starvation...

The Rainout Shelters provide precise separation of roots and the tree canopy from natural rainfall, while maintaining natural air flow, humidity and temperature.

Under the soil, barriers extend to a depth of 1m to prevent lateral movement of moisture. Natural rainfall can be measured and then reapplied in the control shelters to provide detailed comparisons of the effects of drought on tree mortality, physiological processes and water use.

Importantly, these shelters enable researchers to control the seasonal variation of applied rainfall, simulating the effects of a more variable and extreme climate.

Experiments underway at the Hawkesbury Institute often require extended exposure to ambient conditions under low or no rainfall conditions.

The Large Rainout Shelters enable researchers to test the responses of different plants to drying and wetting cycles, and then to dry them down completely as the plants die.

Scientists are using these facilities to understand how long different plants can survive under drought conditions.

Key questions involve how tree mortality occurs under drought and how lack of water and subsequent carbon starvation causes trees to eventually die. 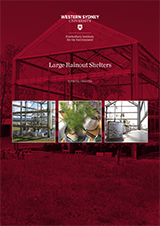