Western Sydney University is proud to take part in Sydney’s high profile Gay and Lesbian Mardi Gras Parade, championing the lead for inclusion and equality across our campuses and within the communities of Greater Western Sydney.

The Sydney Gay and Lesbian Mardi Gras Parade took place on Saturday 5th March at the SCG. This was Western’s eighth consecutive year participating. The overarching theme this year was, ‘United We Shine’. For the University, the theme celebrated us coming together making the statement, “Boldness. Fairness. Integrity. Excellence. We Shine.”

The University invited all students, staff and alumni to join the float to demonstrate our shared vision of diversity and inclusion.  Mardi Gras is a tangible way to support and celebrate our LGBTIQ staff, students and alumni and their valuable part in our University Community.

The Sydney Gay and Lesbian Mardi Gras Parade took place, for the first time, at Sydney Cricket Ground. The theme for 2021 was ‘Rise’. Here at Western Sydney University we’d like to say, “Unlimited – We Rise”. We proudly celebrate all of the individuals and groups that form the LGBTIQ community. We belong to a diverse collective of individuals, and it is our richness and respect of these eclectic experiences, perspectives and values that enables us to rise out of any challenges presented to us.

'We All Matter' headlined Western Sydney University’s float at The Sydney Gay and Lesbian Mardi Gras Parade. We were fortunate to be involved again in our sixth consecutive year attending the parade.
All floats were asked to answer the theme ‘What Matters’. At Western Sydney 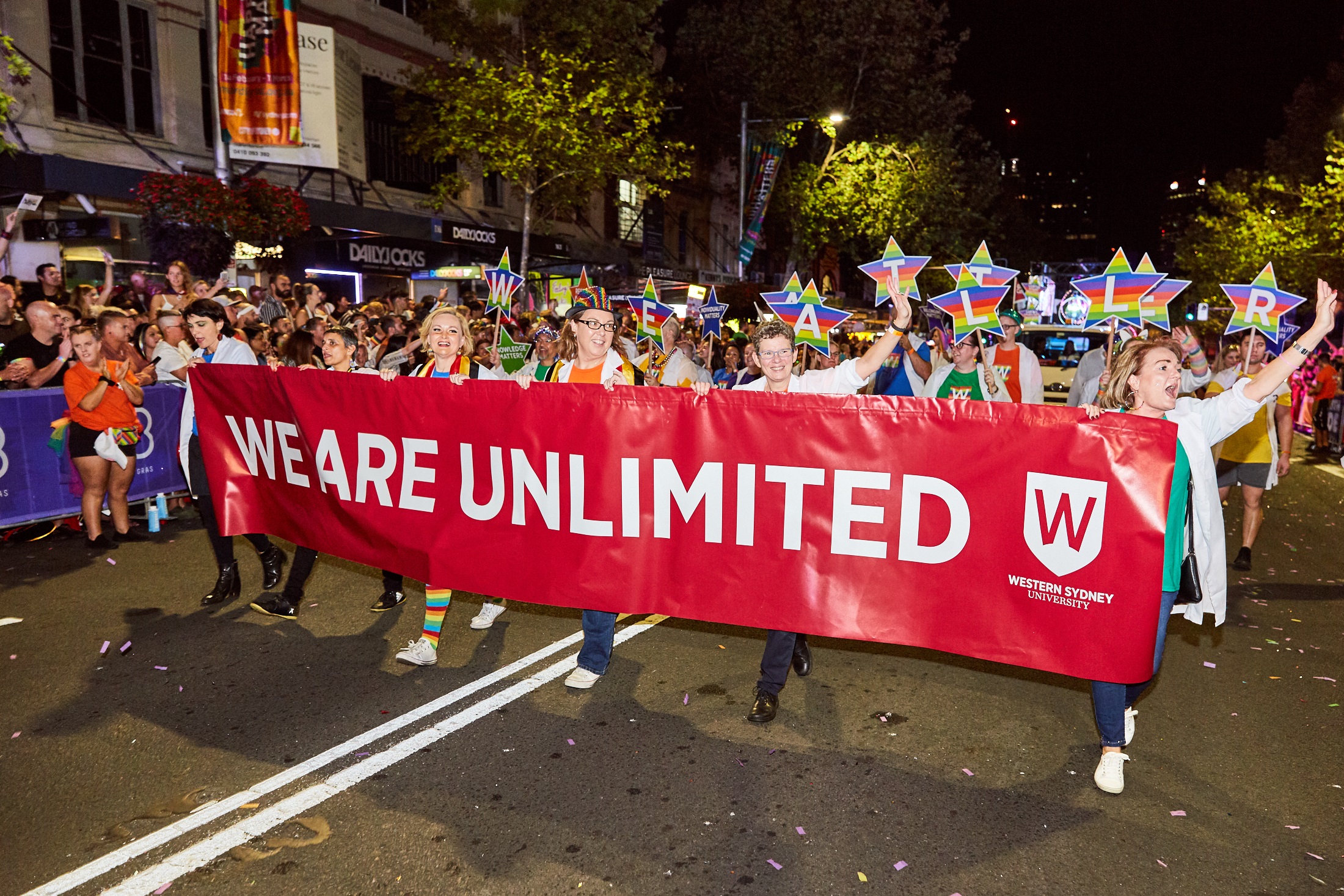 University each of us contribute our own individuality to this intricate fabric of university life. Our float was an example that all of us together make our University what it is. It is an environment where respect, inclusion, knowledge, individuality and belonging matter.
The planning committee put their creative hats on to design the float with a science twist – the float itself signified atoms forming parts of a larger universe, our costumes were lab coats with a shooting star drawing in the University’s Western’s ‘Unlimited’ branding. 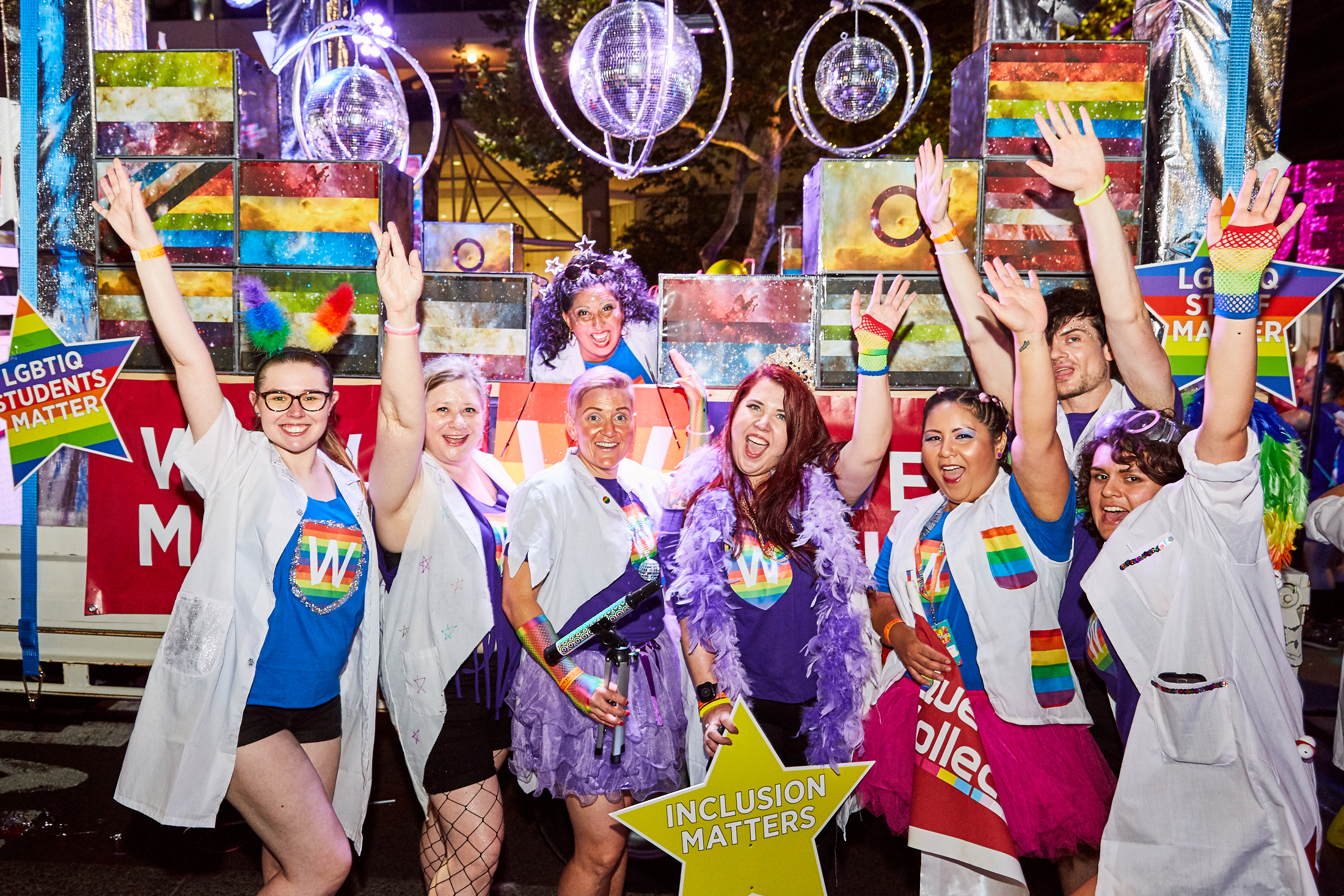 On Saturday 2 March 2019, the Sydney Gay and Lesbian Mardi Gras Parade again celebrated all the colours of diversity and inclusion, highlighting LGBTIQ lives, culture, community and creativity. Across its 41 year history the parade has been an inclusive expression of lesbian, gay, bisexual, transgender, intersex and queer (LGBTIQ) identity and pride. 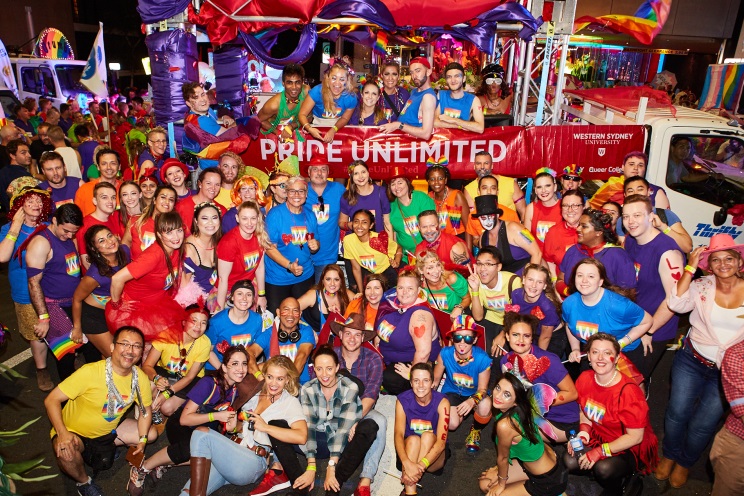 Our academic superheros were accompanied by family, friends and the Pro Vice-Chancellor Kevin Bell and his wife Diane Bell, who joined the lead marchers on their celebratory walk up Oxford Street. On Saturday 3 March 2018, the 40th annual Sydney Gay and Lesbian Mardi Gras Parade celebrated the freedom to be whoever you are. The parade was an inclusive expression of lesbian, gay, bisexual, transgender, intersex and queer (LGBTIQ) identity and pride.

Western Sydney University was proud to again host a float in the Sydney Gay and Lesbian Mardi Gras Parade. In 2018 our theme was ‘Love Unlimited’ and reflected the University’s strong commitment to equality and inclusion of our LGBTIQ students and staff.

This was the first mardi gras parade after the passing of the marriage equality legislation. This reflected in the spirit of the parade with celebrations of this historical milestone.

In 2017, Western went to Mardi Gras, again!  Our third and biggest float so far.  Nearly 100 proud LGBTIQ Western students, staff and their straight Allies marched in the Sydney Gay and Lesbian Mardi Gras (opens in new window)  on 4 March 2017.

In 2017 we marched together, along with the Vice Chancellor, under the banner 'Equality Unlimited' showing the world Western's commitment to equal rights, diversity and inclusion regardless of sexual orientation or gender status. In 2016, Western's Mardi Gras float grew into a large scale affair with 50 of our staff, students, alumni, and partner institutions joining in, and many more helping to prepare the float ready for the parade. We marched under the banner of 'Pride Unlimited' and proudly showed off the University's fabulous diversity and inclusion. Link to YouTube video (opens in new window)
Western strives to demonstrate within and beyond the University our support and celebration of our LGBTIQ identifying staff, students and broader community and this year's Mardi Gras float illustrated this in every way.

Western's Executive lent its assistance to the 2016 Mardi Gras float including a call to all students and staff by the Vice Chancellor, Professor Barney Glover, for Mardi Gras marchers.

In 2015 for the first time, the University's staff and students marched in the Sydney Gay and Lesbian Mardi Gras. Our Ally Network, Queer Collective, and others from across the University paraded together under the banner 'UWS Unites' to demonstrate the University's support for inclusion and diversity in education.